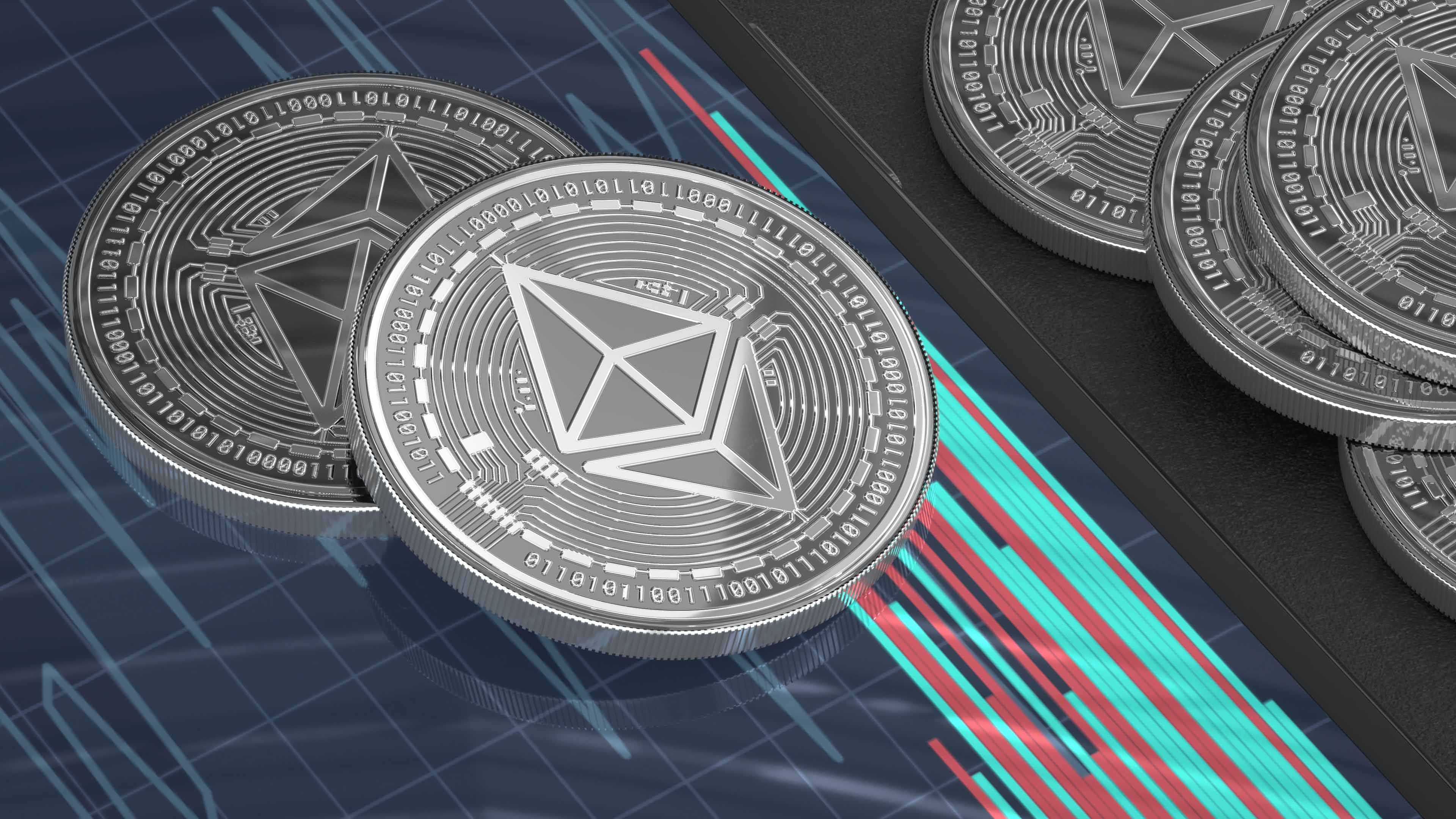 The impact of the ETH merger on the ecosystem and institutional adoption. Can Ethereum’s ‘merge’ make ether the next bitcoin?

However, Ethereum’s native cryptocurrency, ether, is predicted to become a deflationary token amid the merger, also known as Ethereum 2.0. The world’s second-largest cryptocurrency by market value will fully migrate from the high energy-intensive ‘proof of work’ technique to a proof of stake chain approach. The new PoS technique will consume a fraction of the carbon footprint. The Ethereum 2.0 shift to ‘proof of stake’ could appeal to institutional investors concerned about the ESG consequences of the carbon-intensive ‘proof of work.’

What is ‘proof of stake’, and why is it better than ‘proof of work’?

The idea behind Proof-of-stake (PoS) is that it allows cryptocurrency owners to confirm blocks that contain transactions based on the amount of coins staked by a validator. PoW techniques need miners to solve cryptographic puzzles, and PoS mechanisms only require validators to store and stake tokens, which intends to alleviate the scalability and environmental sustainability difficulties of PoW. (2)

Merge’s impact on the Ethereum ecosystem

Important to understand is that the existing PoW will combine with the Beacon Chain during the forthcoming merge, moving the entire Ethereum history to the brand new chain. A shift in consensus for an ecosystem as significant in market cap value as Ethereum will have far-reaching consequences, technically and politically, which is why it might become a popular choice for both private- and institutional investors as a business strategy.

Firstly, the difficulty bomb will skyrocket the proof-of-work mining difficulty level. The difficulty bomb is a protocol modification that will significantly hinder the progress of PoW computations and, therefore, the time needed to process transactions. Simply put, it’s a self-destruct mechanism to promote the transition to an ecologically friendly proof-of-stake (PoS) paradigm. The implementation of the difficulty bomb makes it unable to conduct mining at economically viable scales. The difficulty bomb is a type of code ingrained in the Ethereum protocol since 2015, and it is set to execute when a specific number of blocks have been mined and added to the blockchain. The goal here is to encourage miners to merge completely, stimulating the adoption of the PoS chain.

In addition, Ethereum is releasing new ether at a pace of 4% per year. However, this will likely drop to roughly 1% as part of the Ethereum merge to a PoS-based process. (3) while others claim that Ethereum’s issuance will drop to about 0.6 million per year, with a similar 2.7 million ETH burned, meaning a net 2.1 million ETH burned per year, or -7% in yearly, post-merge (4)

Spectacularly, it is predicted that the switch would grow the network and reduce energy usage by 99.95%, (source) as the transaction processing speed is projected to match that of centralized payment processors.

Moreover, the merger does not only focus on sustainability. The primary scalability solution expected in 2023 is sharding. Sharding allows for parallel transaction processing and aims to increase Ethereum’s scalability, a concern for many institutional investors. (5) The goal behind sharding is to divide the main blockchain into distinct parts so that nodes only need to validate a portion of transactions, making it more accessible for a higher quantity of users. Therefore, it is also predicted that the Ether environment will witness a surge in active users.

How the merger impacts institutional interest and business strategy

With the continual delays of the beacon chain merge, there have been concerns about continuing institutional interest in Ethereum. Still, with a suggested date for the implementation of the merger, institutional investors have something to look forward to. (6) Staking ETH remains intriguing to institutions, and with the possibility of more significant dividends, that desire will only rise post-Merge. As more investors seek long-term growth prospects in the crypto market, the merger will contribute to building a more attractive and promising ecosystem to make investments.

For many institutions, business activities shift as the beacon chain Merge is the foundational step toward a scalable future for Ethereum. It should be seen as a vital milestone toward an environmentally well-developed blockchain.

According to recent CoinShares reports (7), institutional investors have been pouring money into ether-based digital asset funds for consecutive weeks, with these products seeing significant inflows. These statistics are interesting because it illustrates the sentiment of institutional investors. In addition, another key business metric is that Ether-based asset funds received $16.3 million in inflows last week, bringing the total amount received to over $160 million.

“The inflows reflect a minor change in sentiment, having undergone 11 straight weeks of outflows that pushed 2022 outflows to a height of US$460M,” CoinShares said of the Ether funds. The report claims that the shift in opinion might be related to the growing likelihood of the merge occurring in September.

In the week that witnessed record withdrawals of $423 million, the majority of which came from Bitcoin-based funds, institutional investors began showing new business activities when reinvesting capital in Ether-based funds in late June, indicating a favorable position for the Ether ecosystem. Bitcoin and Ethereum seem to compete directly now, as Ethereum is becoming a more popular option for investors.

Considering the narrative around the ETH merge, positioning remains relatively low in the market’s most discretionary segments. In addition, perpetual financing has been adverse throughout most of the rise since June, indicating that there are more shorts in the market than longs.

Although many are apprehensive about the implementation risk, several teams have carefully tested and cross-checked the update over the years. Furthermore, one of the foundations of Ethereum is resiliency. Resilience is why there are so many distinct business clients avoiding ether; the redundancy works as a safety net to defend against isolated edge situations or flaws.

Most importantly, built-in resilience combined with the most competent developer team in the sector and years of planning has convinced us that technical issues are improbable.

Typically, your future prospects show a “sell the news” reaction. Nevertheless, many investors are still worried about the technical risk and plan to purchase after the merger. They think they can mimic the structural effect of the merger without the technological dangers. The post-Merge phase will also determine how much irrational interest is produced as we approach the merge.

Many analysts anticipate strong buying flows and follow-through immediately following the merger since it is essentially “de-risked” by being completed entirely. When strong buying flows occur, sentiment could change, and the active user total could increase exponentially.

What about the mid-term scenario for Ethereum

Although the broader macro environment impacts this number, the adoption rate for crypto   ultimately matters. In addition, this statistic affects pricing because it affects the long-term inflow and outflow of money from the crypto industry.

Another benefit of a more lasting bottom is that a massive amount of vesting from project launches in the previous 24 months has now been absorbed. Staking often involves a “vesting” period during which an investor cannot transfer assets. The fact that people won’t be able to exchange staked assets throughout the vesting time, regardless of price changes, might be a disadvantage. The conditions and regulations for staking vary according to the coin. (8) Furthermore, because most projects are down 70-95%, the USD notional magnitude of all future vesting is much decreased. Together, these two dynamics significantly lower the daily supply the space must absorb.

Finally, investors frequently underestimate the merge it’s influence on the macro environment of the crypto space. There is significant disagreement regarding how much the supply drop generated by previous BTC halvings spurred the subsequent price movement rather than just coinciding with the natural cycles of human emotion and monetary policy. Another typical objection is that supply changes do not influence the price, but factually, there are many arguments opposed to this statement. (9)

Long-term structural flows are more significant over this time range and are simpler to foresee, making the future prospects of Ethereum easier to predict. It is expected for Ethereum’s structural demand to endure, and in addition, new inflows will also exist. In contrast to other tokens, this should lead to long-term and constant appreciation over many years, possibly decades, based on the importance of fund flows as one of the most crucial factors in cryptocurrencies. After the Merge, Ethereum will always have a long-lasting money flow advantage in the digital asset space.

A significant turning point for Ethereum the merge. It should significantly increase the blockchain’s efficiency and decrease energy consumption. However, whether the the merger will be effectively accomplished remains to be seen. However, several other variables are also up in the air and may limit the price swings of ETH after the integration. Therefore, predicting how prices will change following the upgrade is impossible.

Preparing for the merge as an investor

Ethereum and Bitcoin are two of the world’s major cryptocurrencies. While investors debate whether to invest in Bitcoin or Ethereum, Ethereum is presently the second-largest cryptocurrency by market value, trailing only Bitcoin, and is the largest and most developed smart-contract-enabled cryptocurrency.

Still, the merge is expected to launch on the 15th of September 2022, and investors should be aware that this update is complicated and likely to be delayed as new problems may develop. Furthermore, announcements of more delays might have a detrimental impact not just on the price of ether but also on bitcoin and other cryptocurrencies.

Whether investors will gain from placing themselves in ETH ahead of the upgrade depends on various circumstances, including the broader market condition. Advisors should be prepared to inform investors of these risks. However, assuming a successful Ethereum upgrade, investors will need to view an investment in Ethereum differently than in the past since the merger will change many aspects fundamentally.

Are you ready to invest

It is important to us to understand your expectations
and address any questions or concerns you may have
about investing with Icoinic. Request a call back and
we will get in touch with you free of charge at a time that
suits you. Simply fill in the form below and a member
of our team will be in touch.
Want to speak to an Icoinic member right now?
email us at info@icoinic.capital
Speak to us
Linkedin

This website uses cookies to improve your experience while you navigate through the website. Out of these, the cookies that are categorized as necessary are stored on your browser as they are essential for the working of basic functionalities of the website. We also use third-party cookies that help us analyze and understand how you use this website. These cookies will be stored in your browser only with your consent. You also have the option to opt-out of these cookies. But opting out of some of these cookies may affect your browsing experience.
Necessary Always Enabled
Necessary cookies are absolutely essential for the website to function properly. These cookies ensure basic functionalities and security features of the website, anonymously.
Functional
Functional cookies help to perform certain functionalities like sharing the content of the website on social media platforms, collect feedbacks, and other third-party features.
Performance
Performance cookies are used to understand and analyze the key performance indexes of the website which helps in delivering a better user experience for the visitors.
Analytics
Analytical cookies are used to understand how visitors interact with the website. These cookies help provide information on metrics the number of visitors, bounce rate, traffic source, etc.
Advertisement
Advertisement cookies are used to provide visitors with relevant ads and marketing campaigns. These cookies track visitors across websites and collect information to provide customized ads.
Others
Other uncategorized cookies are those that are being analyzed and have not been classified into a category as yet.
SAVE & ACCEPT